A reduction in installation time and maintenance ensures a reduction in costs for installers. Suitable for the most demanding commercial environments the new Axim ES-2100 Electric Strike replaces the standard fixed strike plate of the deadlatch. The Axim ES-2100 electric strike is supplied with a flat faceplate for installation into a frame of a single leaf door or the inactive leaf of a pair of doors. 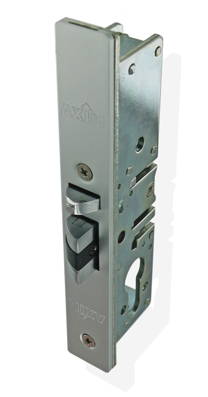 The Axim LK-2100 deadlatch features a fully non-handed reversible latch bolt. A reverse turn of the key while the bolt is held retracted retains the latch bolt in the case, allowing two-way traffic which is ideal for use in busy commercial applications e.g. hospitals, banks, shops which may require free access and exit at certain times, and controlled access and free exit at other times.

The Axim LK-2100 deadlatch product is an ideal product to be used and specified alongside the Axim ES-2100 Electric Strike range offering a remote access control solution for doors.

For more information and full technical specifications visit www.axim.co.uk , or call Axim on
0208 685 2313 and for orders email: orders@axim.co.uk